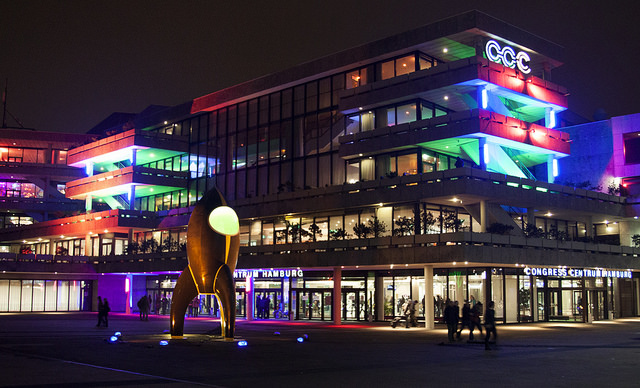 The 31c3. What an awesome way to end the year 2014. For all of you who don’t know what the 31c3 was: a conference organized by the Chaos Computer Club, Europe’s largest collective of hackers. Four days with over 10.000 people and talks on technology, society and utopia.

Or in one word: awesomesauce.

Every time I go to that conference, I have the feeling of being “home”. Lots of like minded people. And everyone is doing something interesting. Some are giving soldering workshops, some work on 3d printers and others hack on little open source projects.

I spent most of the time talking to people, hacking in our little assembly called #rubytown.

Thanks to the rubytown we finally released the new design for hacken.in! Besides that I also participated in a Podcast joint venture you can listen to here.

There were way too much things going on during the conference and I could only watch a handful of talks. But luckily all talks have been recorded and are available online. Here is my list of talks I would recommend to watch:

Ever wondered what is going on computer wise in North Korea? In this talk Will Scott presents his experiences while teaching computer courses in North Korea.

Freedom in your computer and in the net

This talk is a nice example why extremism is dangerous. Even with software. Richard Stallman has some very radical views in this talk. For example if you write closed sourced software, it would be better for you and the society if you stop right now and collect welfare money. And don’t get me started on how small he drew the Linux in his slides and how big the GNU :wink:.

Starbug talks about the issues with current biometric “security”. The most impressive part was how they got access to the fingerprints of the current Minister of Defence.

What happend during the year for the CCC.

This talk demonstrates faults in the smartcard payment and how to exploit it.

In his talk last year, Jacob Applebaum revealed some findings from the Snowden documents. This talk is a continuation of the last talk with new findings.

SS7 is the backend communication system for the mobile phone companies. Sadly it’s highly insecure and exploitable. Here you learn what is possible with it right now.

Estonia relies heavily on electronic voting. Up to 30% of all voters cast their votes online. In this talk J. Alex Halderman showed his alarming findings after their first security evaluation.

Frank Rieger and Ron talk about the security problems in 2014 and what they predict for the coming years.

In this lecture James Bamford explains the history of the NSA. From the very first beginnings in a small building in New York to the behemoth it is now.

A demonstration how Perls language features lead to dangerous and easily exploitable bugs.

The Thunderbold port can be used to own your machine. In a way that is not easily detectable or removable. If this creates nightmares for you, than you should not watch this talk :wink:.

David Kriesel reported a problem in Xerox scanners that led to wrong numbers and characters in scans. This presentation is a recap what happend and how Xerox and the press reacted to his findings.

Every year Maha explains the current trend in the phrases used by politicians. A really worthwhile talk if you are interested in the finer details of the language used in political discourse.

What Ever Happened to Nuclear Weapons?

A really good overview about the history of nuclear weapons. Explaining some of the physics and politics behind the most dangerous explosive weapon known to mankind.

Did I miss something? If yes please leave it in the comments below.