I helped to tutor on a few RailsGirls Workshops in the last two years. After one of the workshops at the beginning of the year I formed a weekly learners group with my Co-Coach Jan. Sadly we could not find a curriculum to use as a starting point for our group, so we improvised one.

In this post I will try to explain what we did.

Most of the people in our group had done the RailsGirls Workshop. They had lots of energy to start writing webapps. During the Workshop they wrote a little webapp that let them create entries, upload images and show the list of items. But most of it is just copy and paste. Not really understanding what is going on. That’s okay. This is the whole point of the workshop. To ignite the wish to learn more. And it works perfectly.

But for a real course you need to start from the beginning. And give everyone enough time to understand everything. And because of that we needed to start with ruby before we could dive into creating websites with HTML, CSS and all the other things that you need to know for that.

We decided that the best thing to start with was to use the codecademy ruby track as an outline.

Every week we would teach a topic and let the students do the course for that topic as a homework. At the beginning of each lesson we did a little recap to make sure everyone understood everything. And if not, we would just try to recap it.

Sheeps, it’s all about sheeps

After we went through the course we thought we need something to strengthen the knowledge before going on. We only had puts and the console at this point. But we wanted to have something that is funny enough to keep everyone interested. We needed a little game.

We called it our sheep simulator. For this we created a field with grass on it and sheeps that moved on that field. Every time the sheep touched the electric wire that surrounds the field they lost a point. After that was finished we added a wolf that tried to kill the sheep.

With the help of emoji it looks like this: 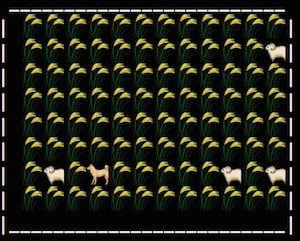 Not bad for the first real programm, right :wink: ?

Web is where the people are

After we had a solid base of ruby, it was time to dive into the world of the wide web. A lot of people advise to start with something like Sinatra and not full blown Rails. Rails is too overwhelming for beginners. All those files and concepts are very hard to understand if you just started writing little programs. With the help of Sinatra you could teach the communication part first and than move to Rails for the next steps. Sadly that means you have to learn Sinatra first and than another framework for the next phase.

Luckily there is a better solution. It’s called Lotus. This framework is really new, but ideal for teaching. Lotus consists of loosely coupled gems that only deal with one part of the stack. Because of that you can start with a small router, teach how the browser requests work and add more stuff later on. Week after week we add another component and grow our little app into a real website. We simply add another lotus gem and add that feature to our codebase. There is no need to distract our students with files and concepts that they don’t understand (yet). After the router we added controllers, than views and templates and after that models.

And since the core concepts are relatively similar to Rails, we will be able to do the switch to Rails (if we want to :wink: ) after we trained everything. Our students will know how MVC works by focusing on one part at a time. Really awesome.

So this is what we did so far. What do you think? How do you teach ruby to beginners?

I am a freelance polyglot developer and love HTML5, testing, TypeScript, Ruby and Elixir. In the last 20 years I have been in lots of different roles, from Java to Elixir, from backend developer at a 3 people team in an early phase startup to the CTO of a web agency. Some of my work can be seen on my projects page.