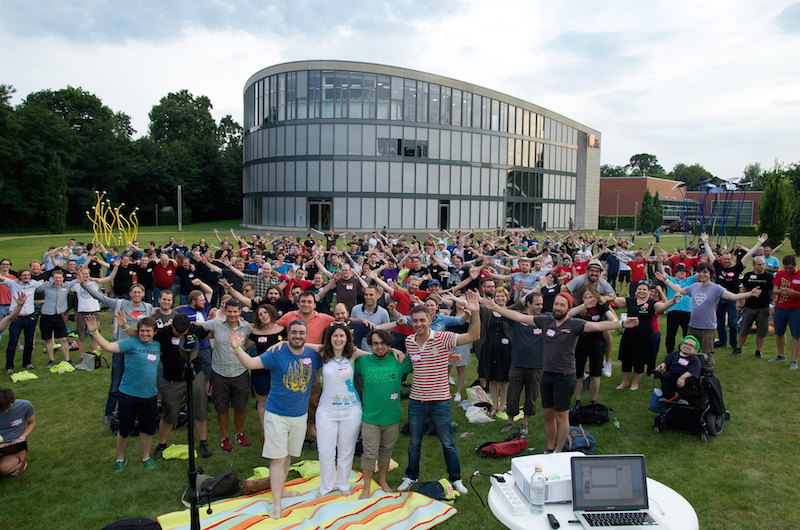 During the preparation of the conference I always had a list in my head. A list I wrote in 2012. During every meeting, every Skype chat I tried to think of it. Tried to fix the issues I had back then. But luckily that was not needed. Everyone knew what we needed to do. What we needed to take care of.

For example the food issue at the Hotel Müggelsee. We found an awesome partner in Knofi for the food during the lunch breaks and got rewarded by tweets like this:

Sadly there was one little issue. The vegan boxes had an egg product in them. But to quote Florian: “at least it was not fish” :wink: . This will be important to double check in the next year.

Some things worked out in the last minute, but overall I would say that I was amazed how much such a small team could do. The vibe on the conference was incredible. Everyone was smiling and happy just to be there. The twitter stream was filled with tweets about how awesome the conference was. I got goosebumps sitting on the lawn in front of the outdoor stage. Seeing everyone enjoying the weather and the conference was a great feeling.

A few people got little cuts in their feet while trying to swim near the venue. This was the one thing I did not take care of from the list. Bummer. But I have now idea how we could improve on that in the next year :sob: .

There are two things I want to highlight that have been very important for me: the anonymous CfP and the real time captioning.

If you organize a conference and don’t do an anonymous CfP, you should think again. That process lead to the awesome talks we had. From lots of people who would never had a chance otherwise. Don’t just invite famous speakers.

Seeing the real time captioning was great, too. At first most people think that this only helps people that are hearing impaired, but this is totally wrong. Tons of people thanked us for this because they had problems following the accents or needed to jump a few sentences back to get what the speaker was trying to say. The captioning was a great help for everyone. Thanks to asquera for this!

If you haven’t watched it yet, here is a nice recap video by polarblau:

If you have comments about the conference, feel free to fill out our feedback from.