I love the Rails Community. It’s one of the best things that happened to me in the last few years. There is only one thing I could criticize: the lack of women. Sadly this is a general problem in the computer industry. But luckily the Ruby people are really awesome and try to change that. There are tons of events and organisations who try to help women get into coding in our community. One of them is called Rails Girls. The first Rails Girls event was helt in Helsinki 2010 and since then it spread like wildfire. Just look at list of upcomming events for the next months. And please don’t get fooled by the girlish look. That look is only demonstrating that they don’t want to teach you rails in a boring way. The event should be fun. And in an relaxed atmosphere.

The first reaction I am getting when talking about this is “but where do you get all the girls?!”. Luckily this is not a problem. The Cologne event had over 60 girls coding. Liane and Tatjana got twice the amount of girls who wanted to participate. There are tons of girls out there who are interested. They just don’t know how to start. And whom to ask. Or to put this in a movie quote: “if you build it, they will come”. 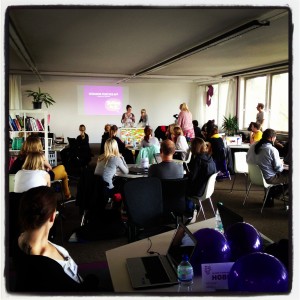 Friday started with a small installation party. Every girl installed Ruby and the editor on their machines. And for everyone who got hungry, there was a beautifull cake and cupcakes from @cakefriday.

On Saturday everyone got their goodie bag and was assigned to one of the 20 coaches. After a few talks from Nadia about Creative.NRW and two shot lesson about the basics of building webapps and Ruby the girls startet creating their app. The whole concept of the event is build around the idea that the girls should be able to finish a small little app on their own. They should leave the event with the feeling that they did something great. And I am pretty sure all of them did.

After the lunch break we had a few more talks. The best one was from @joanwolk and was called “How I went from picking up programming to working in a software company - in a year”. You can get the slides here.

There have been lots of great moments on that event for me. One of them was @bumi who got girls with zero knowledge in Ruby and HTML into creating a flow based layout. After those girls finished the app they had a new idea for an app they wanted to build. And they even continued to build it when we started to clean up the room. To put it into Facebook movie terms: they were in the zone. In a fucking coding zone. On the first day they coded!

Another great moment was when a girl said that here boyfriend told her that this event would never be free and that she must have overlooked something. People teaching this kind of knowledge for free? Why should they do that? Those people could earn tons of money with teaching that stuff. Thank the generous sponsors and the coaches who “worked” for free to make this happen. This is a great example why our community is so great. We don’t see each other as enemies. Everyone is working together to form this community to be as helpful as possible.

Michael did a good job in summarizing the event:

Most fun I ever had teaching. Only thing that's bugging me is that they understand rails way faster then I did back then. #railsgirls

If you want to do a Rails Girls Event 100km around Cologne, just ping me. I would be glad to be a coach again!

And to everyone who is interested to learn Ruby in Cologne: the Cologne Ruby user group cologne.rb will meet on the 17th of october. Currently I am planning to give a beginners talk. I haven’t decided the topic yet, but we would love to see you there!

If you find a little bit of spare time till then, please try to work through railstutorial.org .