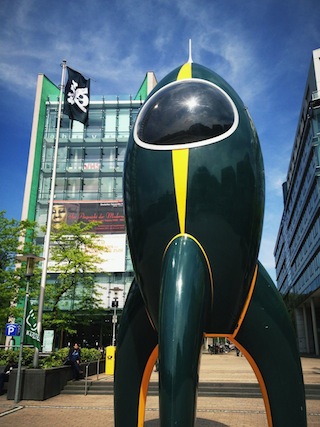 Another month, another big event. It seems like Cologne is a real heaven for nerds right now. From my point of view its right behind Berlin as #2 best nerd place in Germany. Hacken.in is a good proof for that. Cologne should really get its act together and start to enhance its coolness factor. Stop that awkward “internet capital city” campaign and start a fresh new brand. Maybe Made with love in Cologne.

Most of the time I was sitting at the cologne.rb usergroup booth to represent ruby.

Sadly the booth area was not very accepted by the audience, but it was fun nevertheless. I tried lock picking at the neighbor booth by the SSDeV Cologne.

Besides having fun at the booth area I watched only a few talks. The best by far was the Men who stare at bits, which hopefully can be found on the media.ccc.de webpage soon. Udo Vetter gave his famous talk on how to deal with police called “Sie haben das Recht zu schweigen”. If you haven’t watched it by now, you really should.

The next conference will be the euruko. Can’t wait for it!