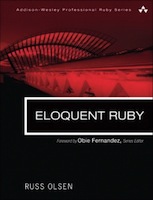 At the moment I am sick at home and use the time to finally read some books that where on my to-do list. The first was “Eloquent Ruby” by Russ Olsen.

It got very positive reviews around the net, including Peter Cooper, who said:

Eloquent Ruby […] is the first Ruby book I’ve read in its entirety within 24 hours; it’s that good.

There is also a positive review by Antonio Cangiano.

What’s it all about? Basically Eloquent Ruby doesn’t try to teach you to write Ruby code, it tries to teach you how to write good Ruby code. Not only by telling you how to write it, but also by explaining why the Ruby world choosed that certain way to do it. I have read it in one day and didn’t learn much while doing so. But it was a good reminder on how and why we Ruby Developers do the stuff we do. And it was a nice read nevertheless. Russ is a talented and very funny author. I would definitively read a book written by him even if it’s about fly-fishing :smile: . Even better: he reacts on tweets about his book.

Strong buying advice for everybody who just started to learn ruby or wants to feel more safe while coding in it.